Craig Hazen – Evidence for the Resurrection

Tomorrow in our apologetics class (Lord willing) I will be having the students watch the excellent lecture by Dr. Craig Hazen on the evidence for the resurrection of Jesus, which includes a discussion of 12 facts agreed upon by scholars, both liberal and conservative.  He then evaluates those 12 known facts against 13 theories about what happened to determine each theory’s explanatory power (which of the 12 facts it doesn’t account for).  The only 2 theories that account for all 12 known facts are:

Here is the note taking form, along with the chart showing the 13 theories which attempt to explain the 12 known facts:

Notes for “Evidence for the Resurrection” by Craig Hazen

(Professor of Comparative Religion and Christian Apologetics at Biola University)

Here is the chart 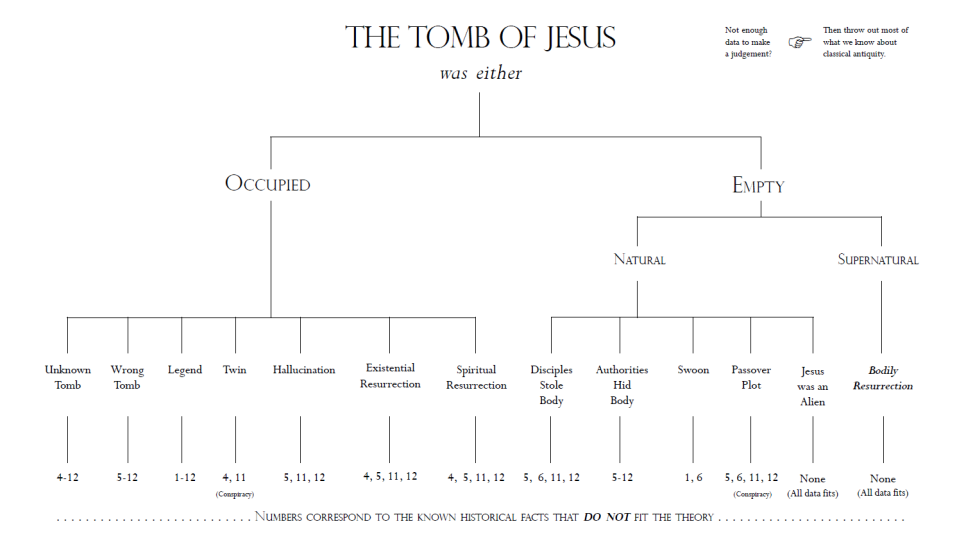 Guard your steps when you go to the house of God. Go near to listen rather than to offer the sacrifice of fools, who do not know that they do wrong. Do not be quick with your mouth, do not be hasty in your heart to utter anything before God. God is in heaven and you are on earth, so let your words be few. As a dream comes when there are many cares, so the speech of a fool when there are many words. When you make a vow to God, do not delay in fulfilling it. He has no pleasure in fools; fulfill your vow. It is better not to vow than to make a vow and not fulfill it. Do not let your mouth lead you into sin. And do not protest to the [temple] messenger, “My vow was a mistake.” Why should God be angry at what you say and destroy the work of your hands? Much dreaming and many words are meaningless. Therefore stand in awe of God. Ecclesiastes 5:1-7

Who Is Jesus / What books should be in the Bible / Is the Bible Really Trustworthy?

Tomorrow, we’re planning to watch 2 videos.  First is lesson 11 of the DVD series

and a second video “The Bible’s Reliability & Accuracy”:

Here is the note taking form I will be handing out with the discussion questions for each video:

Is the Bible Really Trustworthy?

Yesterday in our apologetics class, we watched a video where Brett Kunkle transformed himself into a character he calls Pagan Bob, who is an atheist.  Here’s the video:

Here is the note-taking form I handed out before hand, including discussion questions at the bottom:

John said to the crowds coming out to be baptized by him, “You brood of vipers! Who warned you to flee from the coming wrath? Produce fruit in keeping with repentance. And do not begin to say to yourselves, ‘We have Abraham as our father.’ For I tell you that out of these stones God can raise up children for Abraham. The ax is already at the root of the trees, and every tree that does not produce good fruit will be cut down and thrown into the fire.” “What should we do then?” the crowd asked. John answered, “The man with two tunics should share with him who has none, and the one who has food should do the same.” Luke 3:7-11

On Sunday’s Apologetics class, I was unable to lead due to a weekend “go live” at work, but there was a guest facilitator.  Here was the video the class watched:

Here are the notes that were handed out:

If there is no truth, then only three ways:

Let’s define Truth.  What is truth?

It’s true that I wasn’t born on Mars

-God is an artist.  Man’s art is copying God’s creation.

Old meaning:  tolerate evil things, but not all, eg.  Not murder

You are your actions

Hate the sin, love the sinner

When we condemn the sin, we are not condemning the sinners

Moral relativism in our society is mainly in one are – SEX

The sexual revolution is a philosophy

Moral relativism -> Intolerance (doesn’t include itself)

Only with moral absolutes can there be tolerance

Like the Gnostics (we know better, and the physical world is an illusion, doesn’t matter what you do with your body)

This has overcome the motherhood instinct

Divorce is accepted and prevalent in our society

No society can last with family life de-valued

So the sexual revolution affects everybody

Absolutizes the relative, eg.  The Inquisition

Or Relativize the absolutes is worse

Without an Absolute/God, nothing is left (“Whatever!”)

Your heart is ripped out, humanity is abolished

After Nathan had gone home, the LORD struck the child that Uriah’s wife had borne to David, and he became ill. David pleaded with God for the child. He fasted and went into his house and spent the nights lying on the ground. The elders of his household stood beside him to get him up from the ground, but he refused, and he would not eat any food with them. On the seventh day the child died. David’s servants were afraid to tell him that the child was dead, for they thought, “While the child was still living, we spoke to David but he would not listen to us. How can we tell him the child is dead? He may do something desperate.” David noticed that his servants were whispering among themselves and he realized the child was dead. “Is the child dead?” he asked. “Yes,” they replied, “he is dead.” Then David got up from the ground. After he had washed, put on lotions and changed his clothes, he went into the house of the LORD and worshiped. Then he went to his own house, and at his request they served him food, and he ate. His servants asked him, “Why are you acting this way? While the child was alive, you fasted and wept, but now that the child is dead, you get up and eat!” He answered, “While the child was still alive, I fasted and wept. I thought, ‘Who knows? The LORD may be gracious to me and let the child live.’ But now that he is dead, why should I fast? Can I bring him back again? I will go to him, but he will not return to me.” 2 Samuel 12:15-23

Yesterday in my apologetics class, for Easter Sunday, we watched 2 videos.  First was a short animated video from Impact 360 institute “Did Jesus Rise From The Dead?”:

Then we watched Tim Barnett of Stand To Reason, speaking on the topic of “Did Jesus Really Rise?”:

Here is the note-taking form I handed out for these videos along with discussion questions and the end:

Short Animated video about evidence for the resurrection

Tim Barnett Speaks About Evidence for the Resurrection

The Cross Produced a Dead Body

The Tomb Contained No Body

The People Saw & Touched Somebody

What Are the Explanations Given by Skeptics for these Facts?